Let’s head back to Mexico for the last hard court WTA event until we go to Washington, DC at the end of the July. This will be the last chance for strong hard court players to grab some ranking points before the clay and grass seasons start. Players like Angelique Kerber (+1.3 games on avg hard vs clay, +4% hold + break hard vs clay), Anastasia Pavlyuchenko (+.4 games, +2.3% h+b) and Timea Babos (+2.31 games, +9% h+b) are playing to their strengths this week. Some are doing the opposite. Dalila Jakupovic (-.4 games, -4% h+b), Magdalena Rybarikova (-1.7 games, -10% h+b) and Lara Arruabarrena (-3.2 games, -16% h+b) are all seemingly making things harder for themselves. They could have stayed in the same time zone and taken a short flight North to play an event using a surface on which they play better in a tournament that’s worth more ranking points. This is a smaller tournament and all 3 avoiding qualifying but looking at the Charleston field I think they may have still been able to avoid qualifying or could have qualified fairly easily. I’m constantly perplexed by the scheduling of some players and this week is no exception. Regardless this should be a fun week with a few big names and some lesser known names we like. Let’s take a look at some tournament history to prepare for the week ahead and then break down every quarter to see if there’s any value in the outright markets.

The tables above show us what % of matches since 2010 have gone over a specific total. The top shows just Monterrey and the bottom shows every hard court tournament. Start by comparing the bottom rows, which shows us rates for all rounds of the tournament combined. Things look pretty close to average. At certain points the Monerrey table show some higher rates, but not in a meaningful way. Stick close to your handicap this week, history is giving us no reason to lean towards the over or the under. 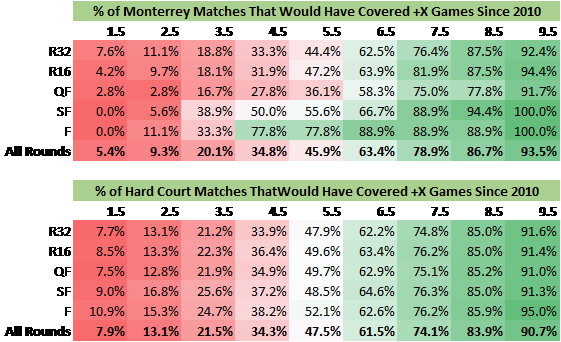 The tables above show us what % of matches since 2010 would have covered various game spreads. The top shows just Monterrey and the bottom shows every hard court tournament. Start again by comparing the bottom rows, which shows us rates for all rounds of the tournament combined. The numbers are a little all over the place. Large underdog spreads cover more often and small favorite spread covers more often. I’m not entirely sure what to make of that. As a general rule of thumb, I avoid small favorite spreads. With all the 6-0/1/2 sets in the WTA you can see someone win the match but lose a -1.5 or -2.5 spread. Full disclosure, I have not done the math to validate that theory, but it makes me feel safe which probably means I’m paying more for it in the long run. Betting is hard.

The Top Half of the Draw

Angelique Kerber is back in Monterrey for the first time since winning this tournament in 2017. She only played 2 matches in Miami so she should be fresh and ready to win it all again. She could have some challenges along the way. Karolina Muchova took her to a 3rd set in Miami, Harriet Dart has been solid on hards this year and then she faces Victoria Azarenka or Anastasia Pavlyuchenkova to make the finals. To be clear, Kerber should win all of those matches and without much trouble. Taking a quick look at the bottom half there isn’t much to be worried about in the final. She’s 1.75-1 to win this tournament. That might be right, but it’s definitely too expensive. If you want to get involved on Kerber, I think you could actually do better with a moneyline rollover where you just bet Kerber to win every match and carry over the balance to the next round. You should end up at 1.75-1 at the worst and you have flexibility to stop at any point without hedging or cashing out.

Azarenka has a slightly easier path than Pavlyuchenkova, but both have to beat Kerber to make the finals. Azrenka is 4-1 which is awful value and Pavlyuchenkova is 16-1 which slightly less awful value. I feel the same way about all the other names in the top half. So Kerber moneyline rollover or pass for me.

The Bottom Half of the Draw

Down below lies Garbiñe Muguruza, the defending champion. Maybe this means she’s going to try hard all week? I have no idea. Trying to figure out what Muguruza might do will takes years off your life. Mercurial doesn’t do the frustration of it all justice. She’s 4-1 to win it all again. I have no interest in that at all. That’s not enough value for all the angst and I think she loses in the final to Kerber anyway. If you really must bet on her then try out the moneyline rollover I described earlier.

Since I can’t count on Muguruza being at her best then there must be some value in this bottom half. Margarita Gasparyan is priced at 20-1. She would face Muguruza in round 2, Kiki Mladenovic in round 3 and then Alison Riske to make the final. That’s kind of a rough stretch and I’d want more than 20-1. I do however, see another 20-1 I like very much. Alison Riske has a cakewalk to the semifinals. At that point she would face Muguruza or Gasparyan most likely. Riske can win that match and it’s a great spot to hedge anyway. I’m putting a half unit on Riske at 20-1.