Clay season is here! I love clay tennis. Long rallies and lots of breaks are what I like and the WTA on clay provides plenty of both. Our first tournament on clay will be played in Charleston, South Carolina which is only a short flight from Miami and in the same time zone. Players should be fresh and ready to get their clay legs going. This is a premier level tournament and as you can see from previous years we should expect 2 great players to meet in the final:

The field is again full of top level talent. Sloane Stephens, Madison Keys, Aryna The Amazonian Warrior Sabalenka, Elise Mertens, Julia Goerges, Anastasija Sevastova, Caroline Wozniacki and Kiki Bertens headline a great draw. I’m very excited for the first clay matches of the year, so let’s look at some history in Charleston and break down each quarter to find some value in the outright market. 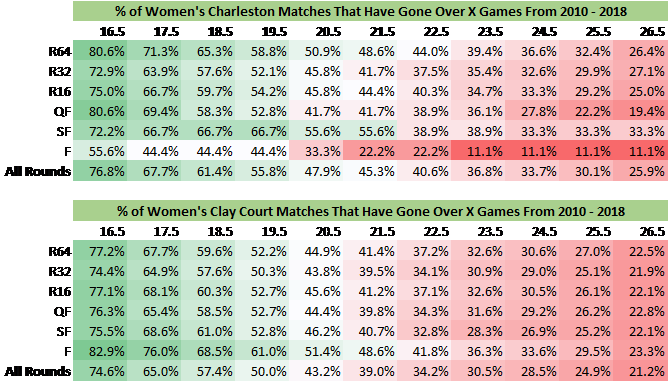 The tables above show us what % of matches since 2010 have gone over a specific total. The top shows just Charleston and the bottom shows every clay court tournament. Start by comparing the bottom rows, which shows us rates for all rounds of the tournament combined. Look to the over this week. Matches go over certain totals 3% to 21% more often than they do on average. If your handicap leans toward the over, feel free to jump in fully and take the over all week. 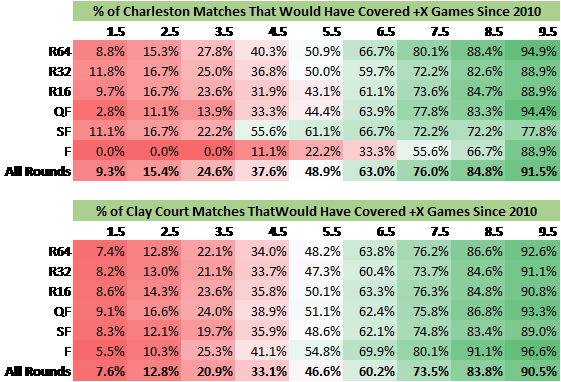 The tables above show us what % of matches since 2010 would have covered various game spreads. The top shows just Charleston and the bottom shows every clay court tournament. Start again by comparing the bottom rows, which shows us rates for all rounds of the tournament combined. To no surprise, with longer matches we also have underdog spreads covering at higher rates than average on clay. In tennis, since the match winner is capped in the amount of games they can win (i.e. 12, 13, 14 in 2 sets or 18, 19, 20 or 21 in 3 sets) the loser would be winning more games if totals were larger. If you’re handicapping spreads then look to the underdogs this week.

What on earth is going on with Sloane Stephens? She is 6-5 this year with 2 losses to women outside of the top 100. The furthest she’s advanced in a tournament is the round of 16. She’s supposed to be one of the best players in the world and she hasn’t made a quarterfinal yet. She has won this event before in 2016 which was the last time she played here. She is one of the favorites here at 8-1 which makes sense if she’s playing her best tennis. She has not been even close to her best this year and I have no reason to expect anything different this week. Hopefully she finds some comfort on clay and gets back to Sloane Stephens I miss.

Thanks to Ms. Stephens participation we do have one very nice piece of value. Tamara Zidansek is 100-1 to win this tournament. Take a look at those numbers from last year on clay. They’re stellar. She has an easy first round match and should be able to beat either Linette or Tomljanovic in round 2. Round 3 could bring Sloane Stephens, but who knows if she’ll even be there and if she is there I think Zidansek could win. Round 4 brings most likely Madison Keys who is very good, but this is another match Zidansek could win. At such a big price you’ll have plenty of value to hedge or cash out if you get nervous. 100-1 is a nice price and I’ll put a quarter of a unit on it.

One of my very favorite players in the world tops the 2nd quarter. The Amazonian Warrior has an easy draw to start. Bye, Pliskova the Lesser and probably Sara Errani shouldn’t be an issue at all. Elise Mertens sits in the bottom half of the quarter with a  similar situation. Bye, Kanepi and Collins/Brengle shouldn’t present Elise any issues. This should be a great semifinal. They’ve played 3 times and Mertens is up 2-1. Sabalenka won on grass and Mertens won on hard and clay last year. The surface really favors Mertens and I think she wins this quarter. The outright prices have it backwards. Sabalenka is 8-1 and Mertens is 16-1. I love Mertens at 16-1. If she wins the quarter she’s looking at Stephens or Keys or, hopefully, Zidansek and I like Mertens to beat all of them. I’m putting a full unit on Mertens at 16-1.

This is a messy quarter. Goerges is a big name, but not a great player on clay. Most of the names in the middle haven’t played a lot of clay tennis. Kenin and Anisimova don’t have much success on clay at the WTA level. Anisimova won all 3 clay tournaments she played in 2017, but all were ITF or Challenger events. Anisimova at 33-1 is kind of interesting, but I’m going to pass on that. Sevastova is sitting in the bottom of this quarter and should win it if she’s healthy and playing well. She’s 16-1 which feels just about right. Belinda Bencic has played 3 clay matches since 2015 so what do you do with her? The more I stare at this quarter the less I know what to do. I keep going back to Sevastova at 16-1, but I just can’t do it. I’ll pass on all the outrights here.

The tournament favorite at 7-1, Kiki Bertens, sits down all the way at the very bottom of the draw. She is one of the very best clay players and is priced accordingly. She kinda ruins all the other outright options here too. Wozniacki is a laughable 10-1. I’ll be looking to bet on Alize Cornet this clay season, but at 50-1 in Kiki’s half of the quarter I will pass. I hate betting the favorite, but at 7-1 with an easy quarter and an easy quarter above her, how does Kiki Bertens not make the final? Maybe Woziniacki finds some form and remains unaffected by her rheumatoid arthritis in the quarterfinals. Bertens beat Woz 2 & 2 in Madrid last year. I’m putting a full unit on Bertens 7-1.