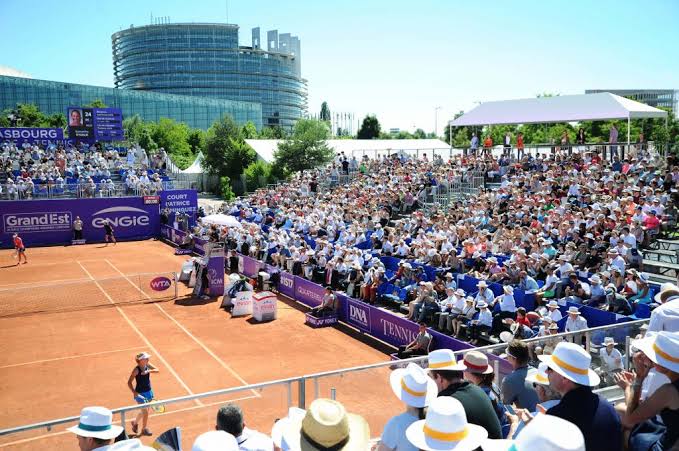 Bienvenue à Strasbourg! This is our last tournament before the French Open. For some players, it’s a chance to get a few more practice sessions and a match or two before heading to Paris. For other players, it’s a chance to grab a title when they don’t have good prospects for Roland Garros. The week before a slam is always tricky. Are the very best players completely focused and motivated to win the match that day? Is there a qualifier or young player on the rise who can take advantage of a path that’s tough in name only? Be sure to consider the goals of any player you might back this week. Now, let’s dive into the draw, pick a winner, and hopefully find a few outright bets.

What you see above is not a mistake. Our #1 seed, Bianca Andreescu, has not played a single WTA match on clay since withdrawing from the 2019 French Open after winning her first match. Even at her peak, clay was not her surface. She certainly showed us enough talent to be good on clay, but not any results yet. She is recovering from having covid and is likely here to get some time on clay before the French Open. This assumes she’s healthy enough to play in Paris. There’s a not small chance she skips this week entirely. She is the 2nd favorite to win this event at 4 to 1. This price not only assume she’s in form, it assumes she’s in good form AND focused on winning this event. I understand why books would do this, but I hope no one actually bets on her to win this event.

That means there is value elsewhere in this draw, but it’s not in this quarter. There are no qualifiers that stick out, Shuai Zhang hasn’t won a match since last year’s French Open, and Sorana Cirstea is playing her first event after Madrid where she sustained an injury that forced her to withdraw from Rome. I think she’s here to test that injury before the French Open. She’s 10 to 1 to win this event, ould be an underdog in the quarterfinals if Andreescu there, and would be an underdog in the semifinals & finals in this field. I’m happy to pas on such a small number.

This quarter likely comes down to a 2nd round match between Jil Teichmann and Yulia Putintseva. Teichmann is one of my favorite players to back as an underdog and in smaller events like this. She had a strong clay season in 2019, but her best showing in 2020 on clay was at this event where she made the quarterfinals. Jil had a good start to the season, but is just 1-3 since making the semfinals in Dubai. Perhaps she can find her form again in comfortable settings. She’s around 8 to 1 win this week. Putintseva has been frustrating this year. Looking at her losses this season she seems to run into a power player at each event and not be able to hit enough winners to advance. Luckily, she might not run into someone like that until the finals if she does at all this week. Yulia is 12 to 1 this week. I’m happy to pass on those numbers for now and hope to grab a live outright after their match. If either is 7 to 1 or better after that match, play that for at least half a unit, but you have to wait.

The bottom half of the quarter is uninspiring at best. Alize Cornet has had success on clay, but is just 2-3 on the red dirt this season and needed 3 sets to close out both wins. She’s just 20 to 1 despite likely being an underdog from round 3 through the finals. Magda Linette is 33 to 1, but has only 1 win since losing in the 2nd round of this tournament in 2020. Similar to Cornet, she’ll be an underdog in every match from round 3 and afterwards. Bet them match to match if you want, but don’t tie up your money for the week at a number you can likely beat in individual bets each day.

Just about every week there is a quarter that I wish I could break up and put the players in better spots in the draw. In Strasbourg, this is the 3rd quarter. Caroline Garcia finished 2nd here in 2019 and recently fired her father in favor of a new tennis coach. She looked much better in her first matches in Parma last week and showed flashes of the talent that has yet to flourish. I think the coaching change should help and hopefully get her back on track to be a top 25 WTA player. She’s 22 to 1 in the outright betting markets.

Barbora Krejcikova is making the transition for great doubles player to great singles player on the WTA tour. She finished 2nd in Dubai and took Swiatek to 3 sets with a few match points in the 2nd. At some point this season I expect her to win an event like this and I was bummed to see her in this quarter. She’s 14 to 1 to lift the trophy this week.
Varvara Gracheva vs. Clara Burel could be a good watch, but either will be fodder for the aforementioned 2 players if they make it past Ekaterina Alexandrova. Ekaterina has had a mediocre start to the season and even a few wins on clay where she generally struggles. She’s in the first round of the French Open already and I expect her to be looking ahead to that event.
Considering of all of that, I’m happy to pass on all 3 of those women, but I will be backing Garcia and Krejcikova. It’s a tough quarter, but I like both player’s chances in this quarter, against the winner of the 4th, and even in the final. The exact staking is below, but you can put these 2 together at a price of 8 to 1 which looks valuable to me. I also don’t think we’ll get as good of a number if we wait until their match is played like thought with Putintseva/Teichmann.

Real quick, Shelby Rogers is 7.5 to 1 win this event. She is 2-7 in the 9 matches she’s played on clay outside of Charleston since 2019. Both wins came in 2019. Both victories were against players ranked in the 500s. Whoever made that number has done a terrible job. Maybe they meant to put a 2 in front of the 7.5 or at the very least, a 1.
The rest of this quarter is qualifiers, women that have not played well at a high level on clay, and Jessica Pegula. She is the favorite to win this event at around 3 to 1. The data you see above doesn’t include Rome where she beat Kasatkina, Osaka, and Alexandrova without dropping a set. Now, only one of them plays well on clay, but they are some of the best, if not the best, players on tour. Her game continues to grow and evolve, but this is a lot of respect from the betting markets and I don’t think it’s warranted. Pegula should be the favorite to win this quarter, but things get hairy from that point forward. I wish her all the very best, but will not be backing her at his number.