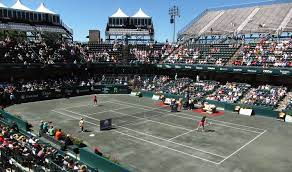 Welcome back to Charleston! To be honest, it took a lot for me to get up the excitement to even type that. As happy as I am to have WTA tennis, does it have to be here again? As I mentioned last week, although this is a clay tournament, it’s actually more of a “clay” tournament. Charleston features a green clay which is not as heavy as the traditional red clay. It creates an almost clay/hard hybrid that can be tough to predict, but let’s try our best. The field isn’t best, but there’s several very talented players and it’s better than no tennis, right? Let’s dive into the draw, pick a winner, and hopefully find some value in the outright betting markets.

Ons Jabeur is the #1 seed and played well last week on these courts. She made the semifinals where she lost to Danka Kovinic 3 & 2. Not the most inspiring ending, but she’s comfortable here and is the best player in the draw. This quarter should be easy for her to win and although one name in the quarter below may have a local knowledge/experience advantage, Jabeur will be the favorite in that and the final regardless of the player that wins the bottom half. She’s 3 to 1 which is a fair price, but I did see one rouge book that offered 4+ to 1 odds. If you have a chance to bet her at 4 to 1, it’s likely value given the ease of her draw. Anything less than that and it’s entirely too risky on a player’s who’s body has never held up long enough to win a WTA level event. Her only final came in Moscow where she made it to the 3rd set against Daria Kasatkina, but began to cramp and her body gave up early in that 3rd set. This is a great chance for her to get her maiden WTA title and is likely focused to win here rather than go to Europe to start her red clay season. I don’t have access to the 4 to 1 or better price, but if you do, bet it.

Shelby Rogers is that name I hinted at in the last section. She grew up in a town just North of Charleston and has played here several times. She made the quarterfinals in 2017, took 2018 off, ran into a hot Jelena Ostapenko in round 2 of 2019, and almost beat Ashleigh Barty in round 3 last week. She’s around 6 to 1 and 2nd favorite to win this event. I see no value in that number given that she might have to beat Jabeur just to get to the final.

Danka Kovinic is playing in the final in last week’s event starting just as I’m writing this preview. I assume she’ll get a day 2, maybe even day 3 1st round match, but I’m wary of backing her after a long week, her first WTA final, and the at the prices being offered which are all less than 20 to 1 to lift the trophy in a bad spot in the draw.

Lauren Davis is playing better tennis and showing flashes of the higher level she showed in 2019. It’s not the easiest spot in the draw, but she’s played well on these courts in the past. Last week she lost to Coco Gauff in the 3rd round and had a few chances to take that match to and made the quarterfinal the W100 event on these courts last year. She might win this quarter, but I can’t see her besting Jabeur or the winner of the bottom half. She was right around 20 to 1 to win this event and I would want at least 30 to 1.

What a mess. Astra Sharma and Natalia VIkhlyantseva were the 2 names that stuck out to me, but Natalia is the betting underdog in her first match and the 2 would play each other in the 2nd round. The winner of that match wins the quarter. As I mentioned, Vikhlyantseva is a dog in her first match and she hasn’t played very well this year. Looking at outright prices she is 50 to1 and Sharma is 40 to 1. Given 1st round odds and the fact that I would pick Sharma in that match, I’m happy to grab her at 40 to 1. Sharma has no reason to be looking ahead to clay season and should appreciate the chance to attack a winnable quarter.

Alize Cornet played well here last week beating Elise Mertens 2-0 and taking a set off Jabeur in her 3rd round loss. Until last week, she’s in poor form and I’m not running to the counter to bet on her to play as well as she did last week.  Her first few matches will be much tricker than odds indicate. She’s 12 to 1 win this event and I wouldn’t bet on that with your money. Yes, this a great quarter to target for value, but not her and definitely not at this number.

I didn’t think I would see Magda Linette as the #2 seed in a WTA level event, but 2021 continues to surprise. She’s 1-3 on the season after an 11-14 year in 2020 despite winning Hua Hin. I would love to bet Maria Camilia Osorio Serrano against her in the first round, but Serrano is playing as I type these words in the final in Bogota, Colombia. If she does even make it to Charleston, she’ll be too fatigued to back in that match or the outright markets. Linette is 20 to 1 and Serrano is 28 to 1 lift the trophy. I can’t play either number in what is the toughest quarter of this draw let alone given the aforementioned question marks.

The names that I’d like to be the most meet in round 1. Clara Tauson looked unprepared for the altitude of Bogota when she lost in 3 sets in her first match the odds on favorite to the win the tournament last week. I’m giving her a little bit of a pass given the conditions and having to face a qualifier who’s had a few matches to get comfortable on the courts. She faces Ludmila Samsonova in her first match in Charleston. Samsonova lost in a tight second round match against Coco Gauff in the first Charleston event. Both have games that I think translate well on these courts and either could win this quarter and even make the final. Tauson is less than 10 to 1 and Samsonova is less than 20 to 1, so at least the outright betting markets made it even easier to pass on both.