Lugano is a fairly new tournament. It began in 2017 as indoor hard courts and moved to clay last year. It’s our first European event since St Petersburg before the first round of Fed Cup matches. Most of the draw either had a short week or the week off leading up so everyone should be fresh. Belinda Bencic and Carla Suarez Navarro lead the field packed with a lot of fun names. Let’s take a look at the very brief history of the event and break down the draw in the search of value in the outright market.’ 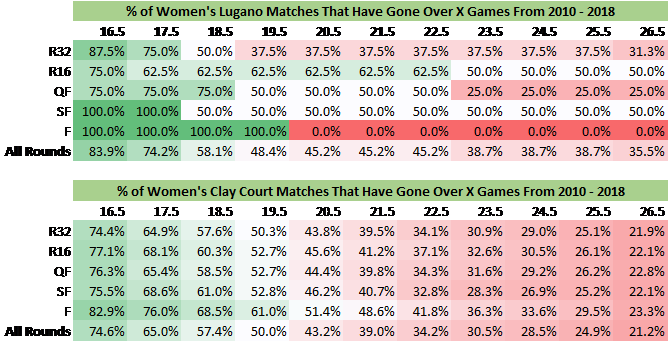 The tables above show us what % of matches since 2010 have gone over a specific total. The top shows just Lugano and the bottom shows every clay court tournament. I’m including this, but frankly I’m not taking much from it. There’s only been one year on clay here. Feel free to use the bottom table to help you evaluate totals based on clay matches in general. 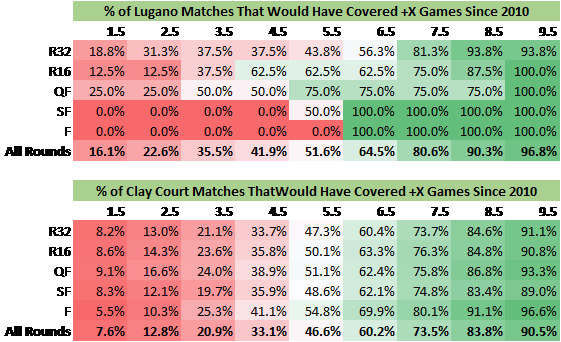 The tables above show us what % of matches since 2010 would have covered various game spreads. The top shows just Lugano and the bottom shows every clay court tournament. As mentioned above, this is mostly to give you some reference point for spreads based on clay averages.

Belinda Bencic is a gigantic favorite at +150. That means the market thinks she has a 40% chance to win this tournament. Does any woman have a 40% chance to win any tournament? What about a woman has played only 7 matches on clay since 2015? She won 3 matches in Charleston, but against Destanee Aiava, Allie Kiick & Taylor Townsend. Is that something to get excited about? I can’t possibly support that pricing in any way shape or form. This means there must be value in the market. I don’t see anyone in her quarter that could beat her, but I do see someone in the 2nd quarter I like. Viktoria Kuzmova is priced at 20-1. She hasn’t had success at the WTA level yet, but she won too high level challenger events last season. No one in her quarter presents a serious challenge and then she faces Bencic in the semifinals and I’ve already mentioned how vulnerable she might be. Half unit on Kuzmova.

The bottom half has a few very nice prices. Carla Suarez Navarro is a great clay player and should be a steal at 9-1. Polona Hercog loves the clay and should be a steal at 12-1. The issue is that they play each other in round 1. CSN is probably the pick, but I can’t bring myself to take an outright ticket on a player who might lose in round 1. I do see 2 players at 40-1 that could definitely make a run. Arantxa Rus and Veronkia Kudermetova are both priced at 40-1. Rus has a slightly easier draw because she wouldn’t see CSN until the semifinals, but I like the value on both. Solid numbers at the WTA level and both have had success at lower levels. I’ll put a quarter unit on each.