The following preview has been completed by Noops, who you can find on Twitter here.

Stayed tuned for more guest previews throughout the year.

Bienvenidos a Mexico! We’re in Acapulco this week where both the men & women play. I’m going to be focusing on the women’s draw. This tournament is played on hard courts. Looking at the last 4 finalists, Sloane Stephens, Dominika Cibulkova, Lesia Tsurenko x2, Kristina Mladenovic, Stefanie Voegele, Wang Yafan, and Sofia Kenin, we don’t see any players that rely heavily on their serve. In fact, it’s mostly players with better movement and higher levels of fitness. It used to be a clay court event, so perhaps the hard courts are on the slow side favoring better movers with higher levels of fitness. Let’s keep all that in mind as we jump into the draw. Before we get to the draw, let’s take a look at some historical data to see how matches in Acapulco compare to other hard court matches in the WTA. 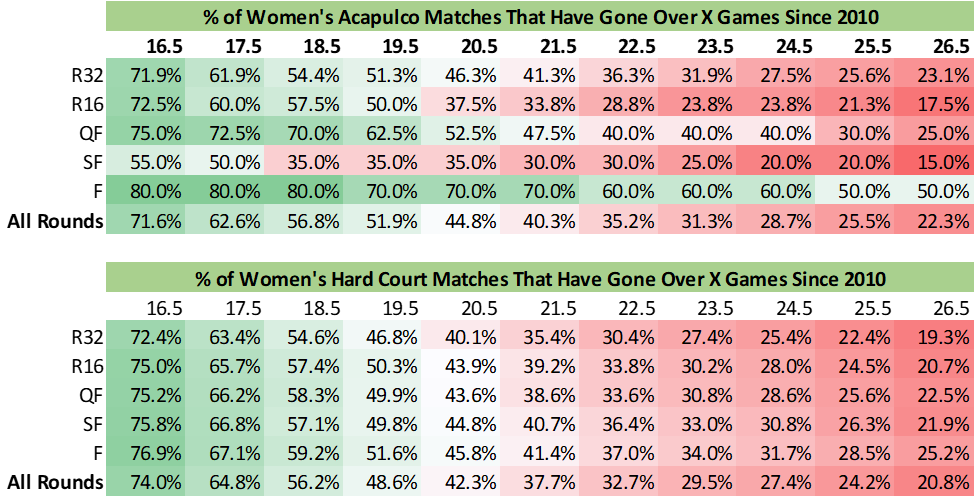 The tables above show the percentage of time a match has gone over a certain total in a certain round. The table on the top shows just Acapulco and the table in the bottom shows all hard-court tournament. For example, 62.5% of quarterfinals in Acapulco went over 19.5 games versus only 49.8% in all hard-court semifinals. Start by comparing the bottom row which shows all rounds combined. Looking at 19.5 and going to the right, you can see that Acapulco tends to have longer matches than average. It’s not in the table above, but there is also a slightly higher occurrence of 3 setters (31% in Acapulco vs 20% on average). Don’t be afraid to look at overs this week. 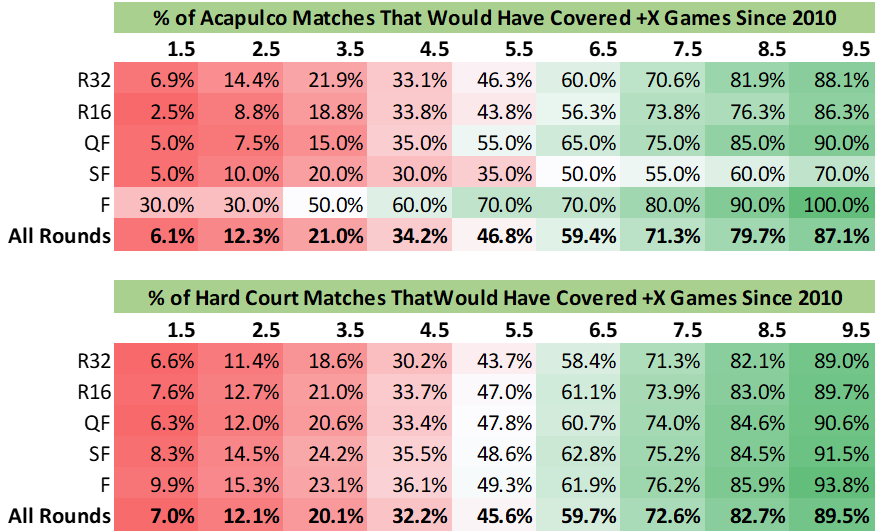 The tables above show the percentage of time a match would have covered a certain spread in a certain round. The table on the top shows just Acapulco and the table in the bottom shows all hard-court tournament. For example, matches in Acapulco in the round of 32 are closer than 5.5 games 46.3% of the time versus only 43.7% of matches in the round of 32 in all hard-court matches. Start by comparing the bottom row which shows all rounds combined. There’s not much variance here, so I don’t think we have anything to glean here unfortunately. Onto the draw!

Sloane Stephens (5.5 to 1) is the #1 seed and the market has her priced as the favorite to win this event. She is without a doubt the most talented player in this field and has had the best career of any women in this event not named Venus. She’s had success here winning in 2016 and making the quarterfinals in 2018. There is one big problem, we don’t know if that Sloane Stephens exists anymore. She has been awful on hard courts since the beginning of last year. She made it t past the 2nd round of a hard-court tournament just once. This season she’s lost all 3 of her hard court matches so far even losing to #201 in the world Arina Rodionova 2 & 2. Her hold+break on hard courts has fallen below 95%. Could this be the beginning of her return to form? Sure. Is that what I’m expecting? No, but her presence makes this quarter very tricky. I certainly won’t be betting on her, but who else is there? Venus Williams is tied for second favorite at 11 to 1 which is silly being that she’s in Stephens quarter, 39 years of age, and could easily lose her first-round match to Juvan. I love a local wild card at 80 to 1, but this well above Zarazua’s level. She beats players in the 260s and loses to players as low as 160.  Shelby Rogers is rounding back into form after returning from knee surgery last season. She qualified for the Australian Open and took a set off Muguruza in round 1. In her last event, a W100 in Michigan, she didn’t drop a set. She’s 14 to 1 to win the tournament which seems right. I would expect her to be an underdog in the semifinals and finals. I’m not seeing any quarter prices, but I’d be interested to bet her in that market if it opens. Otherwise, pass altogether on this first quarter.

The second quarter presents us with some interesting options and that’s before considering how weak I think the first quarter might be. Starting at the top, I think Marie Bouzkova is in great position to win this quarter. She’s 14 to 1, heavily favored in round 1, and I expect her to be the favorite up to the semifinals where she would be a dog to Stephens, but likely a favorite against anyone else in the first quarter. She’s not in the best form, but I think she’s the best player of this bunch. Anastasia Potapova could redline for a few matches, but I’d favor Bouzkova in that match and Potapova has the same odds at 14 to 1. In the bottom half of the quarter is Nina Stojanovic who is 20 to 1 to win this event. She has a qualifier in round 1, I like her chances in the second round, and then she’s already in the quarterfinal. I’m going to take some Bouzkova at 14 to 1 and grab some Stojanovic at 20 to 1. Both are also good picks in the quarter markets if those ever open.

This quarter is a mess. I was hoping Kaja Juvan would grab one of the two qualifying spots, but alas. Lauren Davis (18 to 1) is in poor form and struggled in her appearances in 2016 & 2018. If she finds some good tennis, she could be dangerous, but I’m not biting at that number. Coco Vandeweghe is the most interesting option in the top part of the quarter, but at 20 to 1 and her not so great form I’ll pass. Heather Watson (16 to 1) has been playing some good tennis, but may not have the ideal game for these courts. Like I said, it’s a mess. Pass.

Last year’s champ, Wang Yafan, is in good position to defend her title. She’s the tied for second favorite at 11 to 1 and should be the favorite in her matches until the semifinal. Now she hasn’t won a match on hard courts since the second week of January, but losses to Rybakina, Muguruza, Riske, and Tig (less so) aren’t surprising. She was an underdog to the first three women. She’s defending 280 ranking points which are critical for her stay in the top 75 so I expect her to be laser focused. 11 to 1 looks like value and I’m investing in her championship defense.

Thanks for reading! You can reach me on Twitter @_Noops with any thoughts or questions. Feel free to let me know what I could be doing better or what else you might be interested to know. Have a great week and good luck!